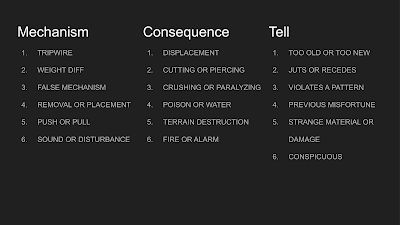 Here is a simple 3d6 table to generate traps. Each trap has three basic characteristics: the mechanism, the consequence, and the tell.


The mechanism is how the trap is activated. Referees should interpret these results loosely; for example, “weight differential” could mean an Indiana Jones-style trap where removing an idol from a plinth releases a boulder, or it could be a rickety bridge that will collapse if a PC is over a certain level of encumbrance. False mechanisms could mean fake doors that fall and crush anyone attempting to open them, or chest mimics that chomp greedy treasure hunters.


Consequences are self explanatory. Be creative in how you approach them, a “crushing” trap might cause rocks to fall on PCs, or it might mean that their hand is maimed if they reach into a cubby. Displacement traps can be stairs that turn into chutes, portcullises that split parties from one another, or even magical teleport traps.


The “tell” is how a PC can be expected to figure out that something is trapped. For example, “too old or too new” might be a row of canopic jars, which when inspected will reveal that one of the jars is free of any dust. The jar is actually a trap set to ward against tomb robbers that will release ghosts when opened. When the referee chooses to reveal the tell depends on the experience of the players and the consequences of the trap (deadly traps should generally be more obvious, unless dealing with an experienced group). For a first session, or for the first trap in a dungeon, the referee might immediately warn players that, for example, there are holes in the walls of this hallway (indicating a dart or poison gas trap). For more experienced players, the referee might simply note that vines grow up the walls in this hallway, and leave it to players to carefully inspect the vines and notice the holes hidden behind them.


I approach hiding and revealing traps by taking inspiration from the old text-based computer adventure games like Zork, where I’ll describe very simply the notable features of a room, which appendix I in the AD&D DMG is invaluable for. If players more carefully inspect and interact with these features, I will give them more clues. For a particularly devious trap, I might obfuscate it under multiple layers; for example, a player might wish to inspect a conspicuously expensive tapestry. If they peek behind it, it reveals an unworked stone wall, and inspecting that unworked stone reveals that it has been knocked down and built back up many times, indicating perhaps a boulder or log trap hidden behind the wall, confirmed by damage to the opposite wall and bits of stone scattered about the room. The point is to force players to use context clues and lateral thinking to reveal the nature of the trap. There might also be multiple clues leading to the same trap, for example the stone scattered about the room in the previous example.


As for how players can thwart traps, I find it’s best to simply leave it up to the players. More often than not they will come up with an ingenious way to disarm or avoid the trap that you would never have thought of yourself, and it saves on prep work for you. Having one and only one way to avoid a trap can lead to a frustrating experience for the players as they try to divine your thought process.


Placement of traps is also crucial. Traps can be fun and exciting, and a dungeon might be dull without them and encourage recklessness. However, too many traps can result in players being afraid to interact with a single feature of your dungeon and slow the pace of the game to the point where it is boring and frustrating. Using wandering monster rolls to force players to move at a decent clip will further frustrate them when they are forced by the clock to blunder into a trap. To encourage player agency in deciding how and when to check for traps, referees must be logical in their placement of those traps. Defensive choke points may be trapped, as well as treasure rooms. In my opinion, it’s more fun for players to thwart a trap they know about than to find a trap they didn’t know about. I usually signal by following the old rule: if it’s too good to be true, it probably is. When my players find a golden statuette atop a plinth that’s surrounded by dried bloodstains, they know to carefully inspect every feature of the room.


Trapping too many mundane rooms can lead to a boring arms race between the referee and the player: last room we entered, a slime fell on us from above, so now we note that we’re always checking the ceiling when we enter. To thwart the players, the referee places a pit trap. Now we’re always checking the ceiling AND prodding the ground with our ten foot pole. Then the referee places a crossbow trap in the next room that fires when the door is opened. Now we specify that we stand to the side of the door when we open it AND we check the ceiling before entering AND we prod the floor with our poles. Well, now the referee electrifies a door handle. Now we put a rag over the handle before we open it AND we stand to the side AND check the ceiling AND prod the floor and and and… for sixty rooms. This is a waste of time! Even though traps are a negative experience for the characters, they should be a positive experience for the players! I cannot stress this enough. My players have fun discovering, thwarting, and even sometimes getting caught by the traps I place in my dungeon, because they are placed in a fair and logical manner that doesn’t make them afraid to walk down any ten-foot stretch of hallway without first tediously checking for traps. Think of traps like the “inverse” of puzzles: rather than solving a problem for a reward, they are solving a problem to avoid a consequence. But the fun of it, for the players, is in the problem-solving! Not in arbitrarily being taxed resources for simply exploring the dungeon, which is what should be encouraged in the first place. While recklessness should be curtailed, exploration and interaction is the point of the game!


If traps can be detected and evaded by interaction, what’s the point of rolls? In my home games, we rarely roll to detect or remove traps. In a strict interpretation of the rules, a thief’s chance to find or remove traps is for small, mechanical traps such as a poison needle trap in a lock, essentially traps that are difficult to detect or disarm by interacting with the world. Regardless, I find myself using less of these types of traps and therefore encroaching on the thief’s design space a bit, so I suggest giving the thief some buffs here and there to even it out.


I encourage you to roll on this table a few times and post any traps you come up with in the comments. On the screen are a few examples from myself. You can also create your own tables to generate unique traps, and I’d love to see any you come up with yourself, so please post them in the comments as well. Thank you for watching!
at November 13, 2021

elfgamin while the sun dies